Suicide is the second leading cause of death for 15-34 year olds.

College students may be at a high risk for suicide due to the pressures of college life and the changes in environment. According to the CDC, approximately 1,100 college students die by suicide each year.

Suicide is the second leading cause of death among 15-34 year olds.

For every person who dies by suicide, more than 30 others attempt suicide.

Among undergraduates and graduates from 2012, 7.1-7.7% of students seriously considered suicide, 2.3% made a plan, and .6-1.2% attempted suicide. The rates for individuals of the same age but not enrolled in college full time are all 1-2% higher.

In the past year,  1.8% of Missouri college students report attempting suicide

Risk Factors
Risk factors are characteristics that make it more likely that individuals will consider, attempt or die by suicide.

Protective Factors
The risk of suicide can be lowered by certain protective factors. They include:

Warning signs indicate an immediate possibility of suicide, whereas risk factors indicate someone has an increased likelihood for suicide, but indicate little or nothing about immediate danger.

People who have experienced rape or sexual assault are 13 times more likely to attempt suicide than non-victims.

Young adult American Indians and Alaskan Natives have higher rates of suicide deaths than young adults of any other ethnicity.

Inside the African-American community, those ages 18-24 are most likely to think about and to attempt suicide.

Latino/a students are less likely to die by suicide, but those who were born in the U.S. report high levels of depression, suicidal thoughts, and attempts.

Overall, the completion rate for suicide is higher in men, especially European American/White men. This is because this group chooses more lethal means. 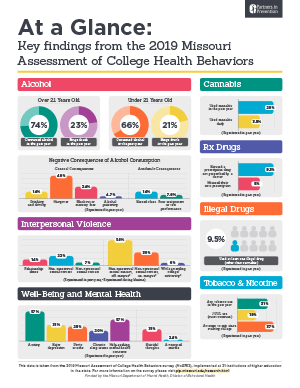 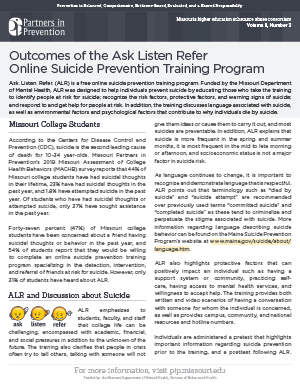 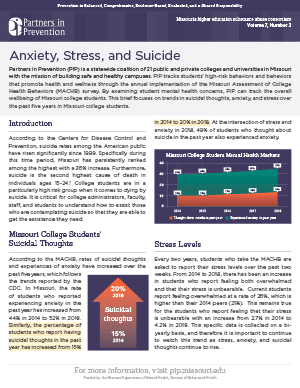 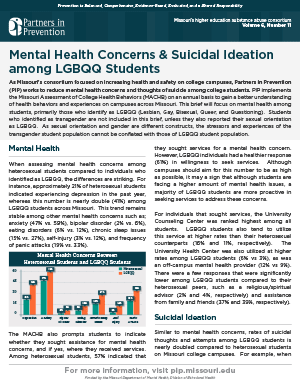 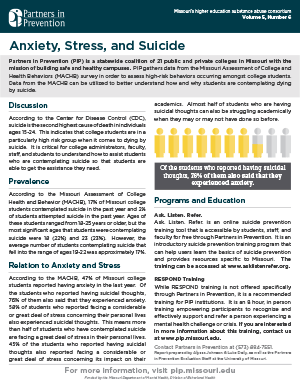 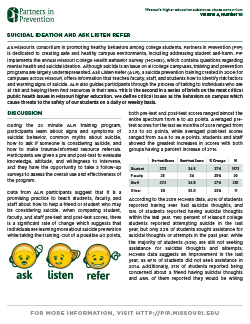 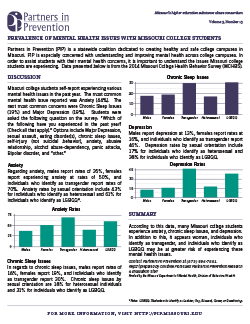 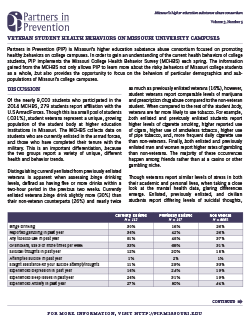 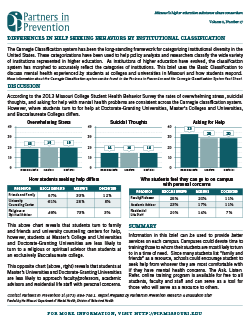 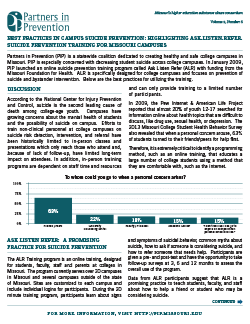 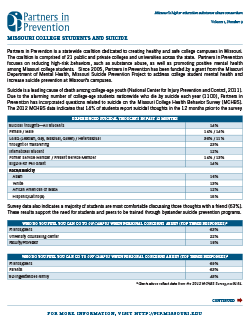 Identify a strategic plan to address suicide prevention. Keep in mind – what specific results or changes do you hope to achieve and how will those help reduce suicide?

What is acquired capacity?

After a Suicide: A Toolkit for Schools
www.sprc.org/resources-programs/after-suicide-toolkit-schools

The Suicide Prevention Resource Center has a great guide on creating linguistically and culturally competent suicide prevention materials and can be viewed here.

Evidence-Based Interventions (taken from the Zero Suicide Toolkit: zerosuicide.sprc.org/toolkit/treat)
Evidence-based interventions include interventions and treatment that are designed to target suicide risk directly. These interventions have demonstrated effectiveness in reducing suicidal thoughts and behaviors. At this time, only a few interventions are supported by research:

Whichever specific model is used, interactions with patients should always be person-centered, collaborative, and careful to acknowledge the ambivalence that patients contemplating suicide risk often feel. Understanding that ambivalence—the desire to find a solution to the intense pain they feel versus the innate human desire to live—is essential for any clinician working with a patient at risk of suicide.

Non-Demand Caring Contacts
A growing body of evidence suggests that post-discharge follow-up contacts with high-risk individuals may be an effective suicide prevention strategy. While non-demand, caring contacts are not treatment per se, they can be used as adjuncts to treatment to:

Two studies tested the efficacy of this intervention: one study with adults, which found reductions in attempts and symptoms,, and a second study demonstrating the feasibility of using a similar intervention with adolescents.45 In Brown and colleagues' (2005) research with adults, a 10-session cognitive therapy intervention focused specifically on identifying proximal suicidal thoughts, images, and core beliefs activated before a suicide attempt. Subsequently, Stanley, Brown, and colleagues (2009) manualized a cognitive therapy intervention specifically for adolescent suicide attempters, called Cognitive Behavioral Therapy for Suicide Prevention (CBT-SP).

CBT-SP can be used with adults and adolescents and includes:

Dialectical Behavior Therapy (DBT)
The term dialectical means a synthesis or integration of opposites, and in DBT, it refers to the seemingly opposite strategies of acceptance and change. DBT has four components, although these may be adjusted in practice to suit specific circumstances:

Collaborative Assessment and Management of Suicidality
Outpatient care is the explicit goal of the Collaborative Assessment and Management of Suicidality (CAMS), which is designed to strengthen the therapeutic alliance and increase patient motivation. CAMS is best understood as a therapeutic framework that emphasizes a collaborative assessment and treatment planning process between the patient at risk of suicide and the clinician. CAMS is supported by six published correlational studies and one randomized feasibility study, described briefly as follows:

Research-Informed Interventions
The standard of care for patients with suicide risk includes some interventions that may be informed by research and clinical practice but do not have a body of research to support them. Safety planning and lethal means reduction are two such interventions.

Safety Planning
A safety plan is a prioritized written list of coping strategies and sources of support developed by a clinician in collaboration with patients who are at high risk for suicide.9 According to Dr. Stanley's webinar presentation to the right, safety planning incorporates elements of four evidence-based suicide risk reduction strategies:

Reducing Access to Lethal Means
Limiting access to medications and chemicals and removing or locking up firearms and other weapons are important actions to keep patients safe.10

Reducing access to lethal means is based on the following suppositions:

Reducing access to possible methods of suicide may be one of the most challenging tasks a clinician faces with a patient. Organization policies should clearly state what clinicians should do regarding lethal means, including the protocol to follow in the event a patient brings a weapon or other lethal means to the clinical setting.

Suicide is often newsworthy, and it will probably be reported. The mission of a news organization is to report to the public information on events in the community. If a suicide is considered newsworthy, it will probably be reported. Health-care providers should realize that efforts to prevent news coverage may not be effective, and their goal should be to assist news professionals in their efforts toward responsible and accurate reporting.

"No Comment" is not a productive response to media representatives who are covering a suicide story. Refusing to speak with the media does not prevent coverage of suicide; rather, it precludes an opportunity to influence what will be contained in the report. Nevertheless, public officials should not feel obligated to provide an immediate answer to difficult questions. They should, however, be prepared to provide a reasonable timetable for giving such answers or be able to direct the media to someone who can provide the answers.

All parties should understand that a scientific basis exists for concern that news coverage of suicide may contribute to the causation of suicide. Efforts by persons trying to minimize suicide contagion are easily misinterpreted. Health officials must take the time to explain the carefully established, scientific basis for their concern about suicide contagion and how the potential for contagion can be reduced by responsible reporting.

Health professionals or other public officials should not try to tell reporters what to report or how to write the news regarding suicide. If the nature and apparent mechanisms of suicide contagion are understood, the news media are more likely to present the news in a manner that minimizes the likelihood of such contagion. Instead of dictating what should be reported, public officials should explain the potential for suicide contagion, associated with certain types of reports and should suggest ways to minimize the risk for contagion.

Aspects of News Coverage That Can Promote Suicide Contagion

Presenting simplistic explanations for suicide. Suicide is never the result of a single factor or event, but rather results from a complex interaction of many factors and usually involves a history of psychosocial problems. Public officials and the media should carefully explain that the final precipitating event was not the only cause of a given suicide. Most persons who have completed suicide have had a history of problems that may not have been acknowledged during the acute aftermath of the suicide. Cataloguing the problems that could have played a causative role in a suicide is not necessary, but acknowledgement of these problems is recommended.

Engaging in repetitive, ongoing, or excessive reporting of suicide in the news. Repetitive and ongoing coverage, or prominent coverage, of a suicide tends to promote and maintain a preoccupation with suicide among at-risk persons, especially among persons 15-24 years of age. This preoccupation appears to be associated with suicide contagion. Information presented to the media should include the association between such coverage and the potential for suicide contagion. Public officials and media representatives should discuss alternative approaches for coverage of newsworthy suicide stories.

Providing sensational coverage of suicide. By its nature, news coverage of a suicidal event tends to heighten the general public's preoccupation with suicide. This reaction is also believed to be associated with contagion and the development of suicide clusters. Public officials can help minimize sensationalism by limiting, as much as possible, morbid details in their public discussions of suicide. News media professionals should attempt to decrease the prominence of the news report and avoid the use of dramatic photographs related to the suicide (e.g., photographs of the funeral, the deceased person's bedroom, and the site of the suicide).

Reporting "how-to" descriptions of suicide. Describing technical details about the method of suicide is undesirable. For example, reporting that a person died from carbon monoxide poisoning may not be harmful; however, providing details of the mechanisms and procedures used to complete the suicide may facilitate imitation of the suicidal behavior by other at-risk persons.

Presenting suicide as a tool for accomplishing certain ends. Suicide is usually a rare act of a troubled or depressed person. Presentation of suicide as a means of coping with personal problems (e.g., the break-up of a relationship or retaliation against parental discipline) may suggest suicide as a potential coping mechanism to at-risk persons. Although such factors often seem to trigger a suicidal act, other psychopathological problems are almost always involved. If suicide is presented as an effective means for ac-complishing specific ends, it may be perceived by a potentially suicidal person as an attractive solution.

Glorifying suicide or persons who complete suicide. News coverage is less likely to contribute to suicide contagion when reports of community expressions of grief (e.g. public eulogies, flying flags at half-mast, and erecting permanent public memorials) are minimized. Such actions may contribute to suicide contagion by suggesting to susceptible persons that society is honoring the suicidal behavior of the deceased person, rather than mourning the person's death.

Poster Campaigns and Awareness Events Personalized for Each Campus
Real Stories: Addressing issues related to stigma of those who struggle with mental health issues or suicidal thoughts. Connect: A program to encourage students to connect with resources and support systems on campus.

Currently serves 41 campuses across the state of Missouri and 14 out of state schools. Visit asklistenrefer.org and click on your campus to take the training! To order promotional item for Ask. Listen. Refer, click here.